This step by step diy project is about grill gazebo railings plans. This is PART 2 of the gazebo project where I show you how to build the railings and how to fit them into place. The railings can be used as serving tables, if you add several stools around the gazebo. Take a look over the rest of my woodworking plans, if you want to get more building inspiration.

When buying the lumber, you should select the planks with great care, making sure they are straight and without any visible flaws (cracks, knots, twists, decay). Investing in cedar or other weather resistant lumber is a good idea, as it will pay off on the long run. Use a spirit level to plumb and align the components, before inserting the galvanized screws, otherwise the project won’t have a symmetrical look. If you have all the materials and tools required for the project, you could get the job done in about a day.

Projects made from these plans 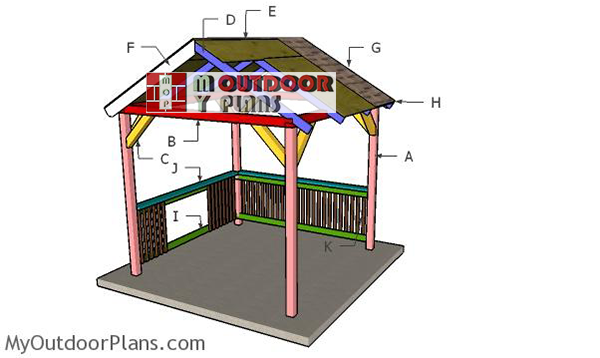 The first step of the project is to attach the 2×4 supports between the posts of the grill gazebo. Align the supports to the interior faces of the gazebo. Drill pocket holes at both ends of the supports and insert 2 1/2″ screws to secure them to the posts. Make sure the corners are square. 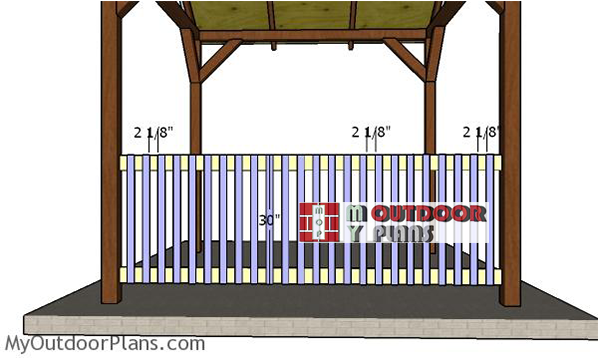 Use 2×6 lumber for the top rails. Make angle cuts to the corners, as shown in the diagram. Fit the slats to the top of the railings, as shown in the diagram. Drill pilot holes and insert 2 1/2″ screws to lock them into place tightly.

Fit the railings to the other sides of the gazebo, as shown in the plans. You can leave more sides open, if you like to. It is up to your tastes and needs. This 8×8 gazebo is build on a frame that is made from 4x4s. The gable roof has a 30 degree slope and it is generally speaking super simple to build. You can tackle this project in one weekend and save hundreds of the dollars. Please take a look over the rest of my woodworking plans, because I have over 1500 free designs.

This woodworking project was about grill gazebo railings plans free. If you want to see more outdoor plans, check out the rest of our step by step projects and follow the instructions to obtain a professional result.

*MyOutdoorPlans is participant in the Amazon Services LLC Associates Program, an affiliate advertising program designed to provide a means for sites to earn advertising fees by advertising and linking to Amazon.com. The links provided in the Shopping Lists and Tools sections are affiliate links. Read More >>